Why do tourists buy junk? 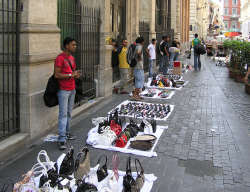 After reading an article in The Age today that pans the tiny republic of San Marino for having an excess of shops selling rubbish that no-one in their right mind should buy, it occurred to me that none of these shops would survive unless there was actually a market for them.

To be fair, San Marino isn’t the only place in that area with an oversupply of plastic trinkets on sale to clueless travellers; I have distinct memories of seeing shady men setting up makeshift stalls on white sheets on the ground, in almost every Italian city that I went to. While on the odd occasion, their wares might have been related to the nearest famous site – for example, plastic colosseums and books on the history of Pompeii (printed in China, of course) – but in general, it was purely junk, like the green plastic soldiers, furnished with a rifle, that vibrate and simulate a real soldier crawling along the ground. While it makes me wonder why anyone would buy such things at all, who would be silly enough to buy them when travelling?.

Many of the vendors clearly aren’t operating legally; I recall seeing one vendor, in Venice, having a worried conversation with a colleague who had just arrived upon the scene, and then quickly packing up his trinkets into a white sheet and running off, very fast; two minutes later, two members of the police force casually strolled into the area – I don’t know if they were even aware that an illegal vendor had been operating there or not. However, if these men are willing to risk arrest to sell their goods, there must be some pay-off and hence I must come to the conclusion that people are actually buying this rubbish.

I see the same here in Australia; Melbourne’s Queen Victoria market is often touted to tourists as a must see, and I’ll admit, the atmosphere is fascinating and it’s a great place to buy food – but half of its stalls are selling the same Chinese-made junk that are sold in similar markets everywhere on the whole planet. I wouldn’t buy any of this in a pink-fit. Do tourists really need fake Gucci handbags? Or even the genuine Gucci handbags, for that matter? Or Bart Simpson t-shirts?

It’s always wise to study a bit about the culture of your destination before you depart, if for no other reason than to avoid accidentally committing a faux-pas and leaving a bad impression upon your hosts. To this end, The Guardian has published a list of the Top 10 Travel Faux Pas.

I am somewhat inclined to disagree with their fourth entry, however, with regard to Australia – I don’t believe there’s anything at all wrong with inquiring about the state of Aboriginal affairs here, although, sadly, the response you get is unlikely to be accurate, if asked in urban areas.