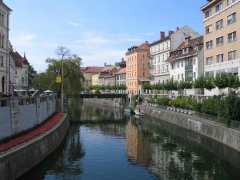 Slovenia is one of Europe’s hidden gems, where a mediterranean coastline meets the Alps, and the Pannonian plain. The capital, Ljubljana, with its wonderful baroque architecture, is incredibly lively for a city of only 260000 people.

Now part of the EU, Slovenia is the first former communist country to join the Eurozone, and its economy is streaking ahead – faster than a couple of the original EU countries, in fact.

Slovenia is easily reached by train – Ljubljana is just under two hours from Villach in Austria, two hours from Zagreb in Croatia and around four hours from Trieste in Italy (bus trips will probably be faster).

From Vienna, there are two direct trains a day, both from the Suedbahnhof, although one is badly timed (22.05) and it may be preferable to take a service to Villach or one of the Croatian-bound trains and change.

There are six Hostelling International youth hostels in Ljubljana and twenty-four across the remainder of the country.