I’ve been to Hamburg twice, but didn’t ever discover the fascinating Old Elbe Tunnel, which runs under the River Elbe, despite the fact that I was staying at the Auf dem Stintfang International hostel, which is all of two minutes walk from it. I’ve just found this video, showing one commuter’s trip through it.

The tunnel allows for pedestrian, bicycle and motor traffic, but what is particularly interesting about it is that the entrance consists of four huge elevators, rather than a passage to the surface, and cars are physically lowered down to the tunnel and then up again at the far end. Naturally, this doesn’t make for very high traffic throughput, and the tunnel is mostly used as a tourist attraction these days.

The northern entrance is close to the LandungsbrÃ¼cken U-bahn and S-bahn stations; to get there, catch either the S1, S2 or S3 S-bahn lines, or U3 U-bahn line, from Hamburg Hauptbahnhof.

I wish I’d known about this, when I was last in Berlin: Alternative Berlin, a series of tours of that give visitors a taste of everyday Berlin, rather than just sights from a guidebook – everything from graffiti to driving Soviet style tanks. The main tour leaves from Alexanderplatz every day at 11am, and they recommend that you have a daily public transport ticket.

Continuing on from the series we started last week on online language courses, this week we’ll be looking at German.

For European travellers, German is probably the second-most useful language one could learn, after English. It’s spoken by approximately 100 million native speakers worldwide, and is spoken in Germany, Austria, a large part of Switzerland, Luxembourg, Liechtenstein, parts of Belgium, and pockets of Denmark, Poland, Italy and Hungary. It’s also well known as a second language in eastern Europe, particularly by older people. 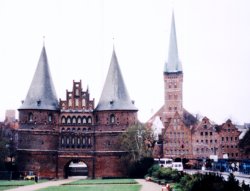 Germany is well-known for some of its historic cities that look like they’re straight out of a fairytale, and LÃ¼beck, the former capital of the Hanseatic League, certainly falls into this category. If you’re a medieval-architecture aficionado, you’ll be in your element here, with three areas listed as UNESCO World Heritage Sites.

The old city area is situated on an island in the middle of the river Trave. The town is famous for the towers that form one of its two remaining city gates, the Holstentor, located in the west of the city and likely to be the first landmark you see if you arrive by train.

Other famous sights include the Marienkirche, the imposing 14th-century Gothic-style cathedral – the third largest church in Germany; the Heiligen-Geist Hospital, a medieval almshouse; the Burgtor, the Castle Gate to the north of the city; and the 13th century town-hall in the centre of the city.

LÃ¼beck has two youth hostels: the Altstadt hostel, located in the old city, about ten minutes walk from the railway station (84 beds, â‚¬17,10 per night), and Vor dem Burgtor, located at the north end of the city (211 beds, â‚¬16,00 per night).

There’s an hourly Regionalexpress rail service from Hamburg (50 minutes), and also from Kiel (one hour and twelve minutes), so LÃ¼beck can make an ideal day trip from either of those two locations. LÃ¼beck is also served by the rail/ferry service to Copenhagen, Denmark (four hours), via Puttgarden, and hence makes a worthy stop on a trip to Scandinavia.

It’s September, so it must be Oktoberfest 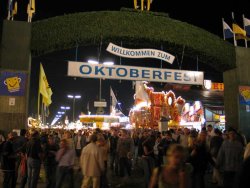 Germany’s most famous festival is on again in Munich and if you happen to be in the vicinity, I thoroughly recommend making a visit. For the uninitiated, it’s a two week fiesta of food, socialising, fair-ground rides and of course, beer.

I was last there three years ago, arriving on the opening purely by chance, on my way back from a three week trip around the Balkans. It’s well worth dropping by, just to experience some of the wonderful Bavarian food.

Much has been made of the dearth of available accomodation without booking in advance, but I found that I was able to get into a reasonable priced hotel quite easily, just by looking on the net from an internet cafe opposite Munich’s main railway station. Even if it does prove problematic, Munich is served by a great public transport network, so staying in surrounding towns on the outskirts (for example Dachau) is always an option.

While most travellers would be very familiar with the huge party that is Munich’s Oktoberfest, fewer would know that there are many more similar traditional German festivals held throughout the year in other German cities. One of the larger festivals is SchÃ¼tzenfest Hannover, which opens in four days’ time, on June 29th, and runs until July 8th.

So, for anyone thinking of heading to Germany to get a taste for the beer halls and traditional German food, here’s a brief guide to Hanover and some of the sights of the surrounding area.

END_OF_DOCUMENT_TOKEN_TO_BE_REPLACED

Heiligendamm in the spotlight

stuff.co.nz has an article on the German seaside resort town of Heiligendamm, the host of last week’s G8 summit and scene of clashes between police and anti-globalisation protesters.

Heiligendamm is accessible by hourly steam trains on the narrowgauge railway known as the Molli, from Bad Doberan; the trip takes about 20 minutes. Bad Doberan, in turn, is approximately 20 minutes away from the northern German city of Rostock, on a regional express service.

If you’re heading to Germany this summer, and are looking for some offbeat attractions, you might be interested in Gridskipper’s guide to the Seven wonders of Berlin. 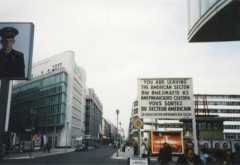 In the first of a series of articles on northern Germany, The Toronto Star visits a Ballhaus in Berlin, a city in a constant state of change.

Next Sunday (June 10th, 2007) marks the opening of the new eastern TGV high speed railway line, that will provide fast rail connections from Paris and Strasbourg to Basel, Zurich, Frankfurt and Stuttgart. As The Guardian explains, this is likely to open up much of southern Germany and eastern Switzerland to rail tourism.

The services to Germany will be operated by a new company named Alleo, as reported by Marcel Marchon of trainblog.com, whilst services to Switzerland will be run by TGV Lyria.

In The Know Traveller reports that prices from Paris to Basel, one way, will be a hefty US$128.

Meanwhile, The Independent provides the Complete Guide to Switzerland in style.